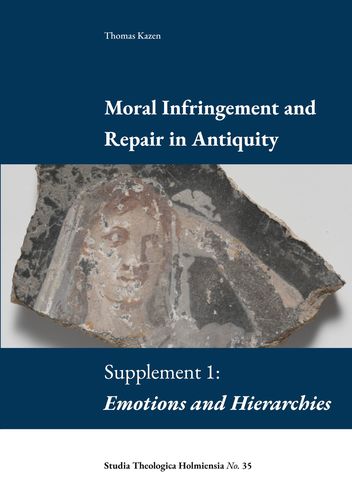 Moral Infringement and Repair in Antiquity

Läs mer
Beskrivning
Moral Infringement and Repair in Antiquity, is a series of publications related to a project on Dynamics of Moral Repair in Antiquity, run by Thomas Kazen and Rikard Roitto between 2017 and 2021, and funded by the Swedish Research Council. The volumes contain stand-alone articles and serve as supplements to the main outcome of the project, the volume Interpersonal Infringement and Moral Repair: Revenge, Compensation and Forgiveness in the Ancient World, forthcoming on Mohr Siebeck in 2023.
Supplement 1: Emotions and Hierarchies, contains four articles and chapters by Thomas Kazen. Three of them are republished in accordance with the publishers' general conditions for author reuse. The fourth has not been published before.
1. Emotional Ethics in Biblical Texts: Cultural Construction and Biological Bases of Morality.
2. Viewing Oneself through Others' Eyes: Shame between Biology and Culture in Biblical Texts.
3. Law and Emotion in Moral Repair: Circumscribing Infringement.
4. Retribution and Repair in Voluntary Associations: Comparing Rule Texts from Qumran, Collegia, and Christ Groups.
Författare

Thomas Kazen is professor of Biblical Studies at Stockholm School of Theology (University College Stockholm). His previous publications include Emotions in Biblical Law (2011), Scripture, Interpretation, or Authority? (2013), and several volumes on ritual purity, most recently Impurity and Purification in Early Judaism and the Jesus Tradition (2021). He has published on the historical Jesus and in Swedish on same-sex relationships in antiquity. He often makes use of cognitive and psycho-biological perspectives in his interpretations.