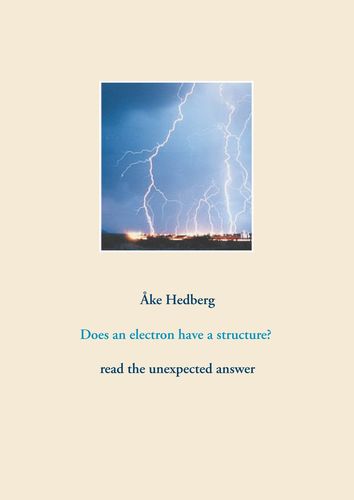 Does an electron have a structure?

Läs mer
Beskrivning
The superficial philosophy that believes that the electron lacks content and thus structure, and thus is punctual, has its roots that can be traced back hundred years, as the author sees it.

Then founded the positivist philosophy we find in today's physics and other natural sciences. The contents will be destroyed in Heisenberg's and Bohr's philosophy, the so called Copenhagen interpretation where the statistical data and mathematical formulas is all we can lean on.

A philosophy Albert Einstein stubbornly criticized his entire life, as we know. Only fuzzy statistics that God plays dice, he meant.
This is often the content of any criticism of the Copenhagen interpretation, and it was his.

The belief that quantum mechanics is the final truth is a major obstacle to scientific development. Therefore Einstein could not convince Bohr and others with his criticism. There were also some important puzzles missing for this at this time. More sophisticated instruments were required than were available 80-90 years ago.

Therefore, it took a long time in the 1980s before an advanced chaos theory could be established.

But the established truth about the perfect quantum mechanics prevented an integration with new discoveries and theories. Thus, one has not realized that nature was and is organized not only in the mechanical way that quantum mechanics and wave mechanics and so on assume. What chaos theory using fast computers so graphically and vividly could show.

It is thus no coincidence that physics deals with punctual mechanical objects, but is a consequence of a world view, an ideology. In fact, there is nothing in this world that does not have a structure.
Författare