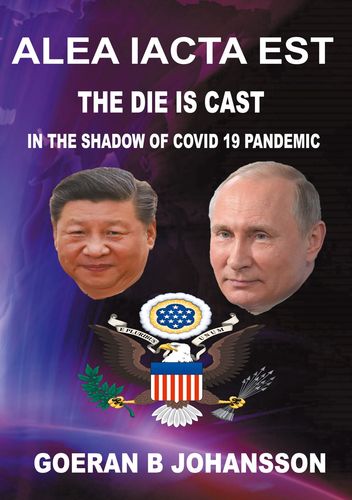 In the Shadow of Covid 19 Pandemic

Läs mer
Beskrivning
The book deals with the latest global developments since the presidential election in the US in 2016 when Donald Trump took over the presidency in the White House.

The author gives a historical look back at the earlier geostrategic theories from the 1800s - 1900s, of which Great Britain and the United States have followed the classic Anglo-American ditto in practice since the First World War and until recently.

Also, a reasonably detailed presentation is given about the, in the West among the population, relatively unknown Petrodollar System, which took place after Breton Wood.

This Pax Americana-colonial power tool, where the United States can no longer act militarily globally without risk with its aircraft carriers, which is the cornerstone of the United States' superpower status, is currently under intense attacks from Russia and China. With the fight for oil in focus and where Vladimir Putin has succeeded in the entirely impossible. Namely, to receive political support from all countries in the Middle East.

We get an overview of the Anglo-Saxon classical geostrategies. Furthermore, Foundation of Geopolitics, the Fourth Political Theory, and Eurasianism, by the Russian professor, geopolitician and ideologue, Alexander Dugin, whose policies are primarily led by Russia under Vladimir Putin. In an action under which China's, Xi Jinping, forms support as the most potent coastal power in Eurasia.

The entire course of events has escalated dramatically in the shadow of the COVID-19 pandemic, which received enormous global economic and other consequences.
Författare

Goeran B. Johansson is a retired teacher, IT support technician, and born in Gothenburg in 1945. He has previously had leisure assignments in the Social Democrats as an International and EU representative but is now a non-partisan.

He has traveled a lot and lived for a long time in different countries in Southeast Asia. His primary interests are history and independent geopolitical analysis with a focus on the ongoing global power struggle between the US-NATO vis-à-vis Russia and China within the BRICS / SCO.

He is a multi-instrumentalist and plays piano, violin, classical guitar, and various accordions at a high level. He is fluent in English and Russian. He is fascinated by chess and its strategic thinking.

He is currently writing part four in a series of independent pieces about Vladimir Putin and his strategy to take on the Anglo-American Empire to make the world multi-polar and, depending on developments primarily, go even further in its ambitions.