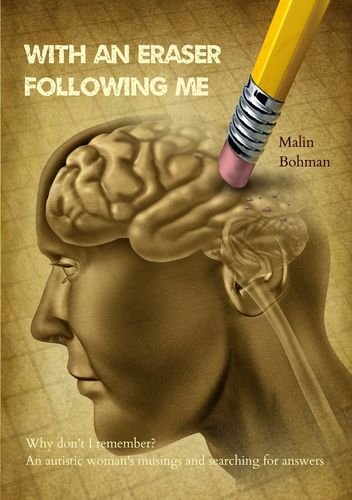 With an eraser following me

Why don't I remember? An autistic woman's musings and searching for answers

Läs mer
Beskrivning
Having the ability to remember what you have previously experienced, or at least the essential parts of it, is something most people take for granted. But that is not the case for everyone, and some people lack access to their so-called autobiographical memories. A condition that is called Severely Deficient Autobiographical Memory, or SDAM.

Malin is one of those with this condition. In this book, she tries to describe what it means to have SDAM, how it affects her, and reflects on what the neurological causes may be and what might work a little differently in her brain. She also muses about her long and painful journey in the world of psychiatry, since it took almost 28 years before she finally received her diagnosis: autism and memory disorder.

WITH AN ERASER FOLLOWING ME is thus a book for those of you who want to learn a little more about this unusual memory problem and what it can be like to live with it. It is also a book for those who may want to get an insight into how wrong things can go when knowledge and understanding are lacking in healthcare, and when a patient gets hurt, despite the best intentions.

"Here is a book that is both touching and full of valuable information, that reads like a novel at times, like a thriller at others, and like a textbook too."

Malin Bohman (born in 1966) resides in a small town called Falköping in Sweden. She has been receiving sickness compensation (pension) from the state for many years now.

She sought help from psychiatry in the early 1990s, but unfortunately, it took until 2018 for her to finally be adequately diagnosed with autism and memory disorder.

During these years, she has struggled to find answers as to why she has the difficulties she has with her memory, but also with other things that later turned out to be associated with autism, or Asperger's syndrome.

Malin is thus well versed in what she writes about, and she now also wants to share the experience and knowledge she has gained over the years.