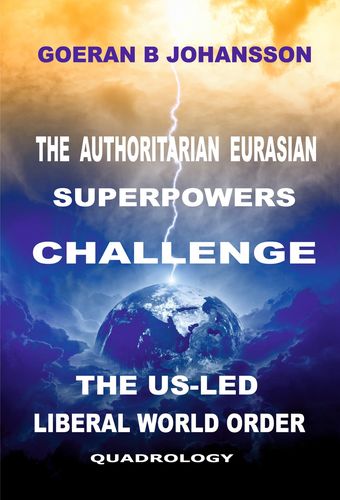 Läs mer
Beskrivning
The four-books in the quadrology covers the entire dramatic global strategic development since the Kosovo war in 1999, Russia and Chinas cooperation in the BRICS and SCO. Ukraine crisis in 2014, Syria, the dramatic development in the South China Sea, the US presidential elections in 2016 and 2020 and its implications for the US global leadership.
In addition, dialogues occur in parts 1 to 2 between the author and American, Swedish highly ranked retired military and a Russian geostrategist in Vietnam in 2013.

The development is analyzed in detail in terms of ideology, history of ideas, geostrategy, economy, and military technical analysis.
Finally, a summary analysis of more than fifty pages follows, including the latest dramatic development around the US epic chaos-influenced retreat from Afghanistan and the development of events after February 24 until May 9, 2022.


Following the attack on Ukraine on February 24, 2022, Russia is on the frontlines against the Anglo-Saxon Western World.
Yet, except for French Guiana in Latin America, the rest of the world refuse to follow Wests sanctions policy against Russia.

In the near future, the struggle between Russia and the Anglo-American Western world will have the character of a positional political and economic war, and whoever first gives up will lose.

If Russia falls, Eurasias authoritarian superpowers will fall, and the Anglo-American Western world will take over globally.

But if the Anglo-American Western world falls, Eurasias authoritarian superpowers, Russia, and China, will have crushing world domination in control of the World Island, Eurasia, and Africa.

The quadrology contains an extensive list of sources and is richly illustrated.
Författare

Goeran B. Johansson is a retired teacher who has previously been a leisure politician and has served in the UN forces in Cyprus from 1967 to 68. He has traveled a lot and lived in different countries in Southeast Asia for a long time. Mainly in the Philippines.
His primary interests are history, political ideologies, and independent geopolitical analysis focusing on the ongoing global power struggle between the United States, NATO vis à vis Russia, and China within the BRICS and SCO. But also fiction and some of his most recent, read works are, The Count of Monte Cristo by Alexandre Dumas, The Master and Margarita by Mikhail Bulgakov and last but not least The Dwarf by Pär Lagerkvist and The Prince by Niccolo Machiavelli.
He is also enthusiastic about chess and its strategic thinking. He is a multi-instrumentalist and plays piano, violin, classical guitar, and various accordions at a high level. He is fluent in English and Russian. He has also written two short stories published in Swedish and English, A Swedish Fellow in Asia, published in Swedish and English, and Lymene Holy Mother of Divine Grace.