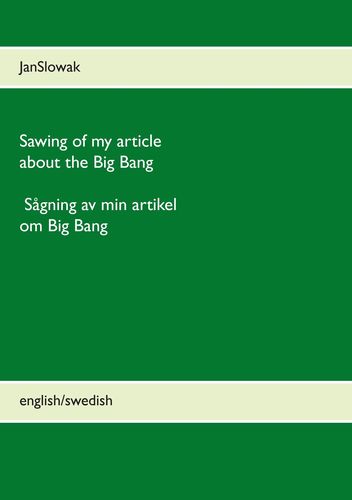 Sawing of my article about the Big Bang

Läs mer
Beskrivning
Big Bang theory is the prevailing theory of the origin of the universe and its development. Its main argument is so-called "galaxies escape".
The analysis of the light from galaxies shows that the spectral lines are shifted to the red part of the spectrum. Based on the Doppler effect interpret this to mean that "most" of galaxies receding from the observer. It is said that in the past was galaxies closer together. If we goes even further back in time, this means that the entire universe was compressed into a point that exploded. There we have Big Bang.

The author has published an article in the topic above.
But the article was totally sawn by an opponent.

The author would like this letter to defend themselves and want to show their duel for everyone to judge what is right or wrong, or better said how much it is right and how much is it wrong!
Författare

Jan Slowak was born in Transylvania, Romania. He has studied mathematics and computer science at the University of Babes-Bolyai in Cluj-Napoca.
Jan has been living in Sweden since 1988.