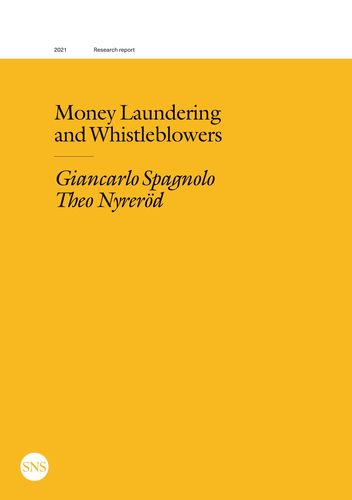 Läs mer
Beskrivning
Money laundering is estimated to annually amount to between 2 and 5 percent of global GDP. Also, less than 1 percent of proceeds laundered via the financial system are seized and frozen by regulatory and law enforcement agencies.

The fight against money laundering has been an international priority for at least thirty years, but the problem seems to be as pertinent as ever. In the report, this is illustrated by describing a number of recent cases of anti-money laundering non-compliance in financial institutions.

Globally, the Financial Action Task Force (FATF) is the primary standard setter for combating money laundering and terrorist financing. It has managed to achieve broad compliance among its over 180 member countries. However, research presented in the report calls its "outcome effectiveness" into question.

The authors assess one new supervisory and enforcement method: offering financial rewards to whistleblowers who bring particularly valuable information regarding severe cases of anti-money laundering non-compliance in financial institutions to supervisory law enforcement agencies. In doing this, the authors draw on the experience of whistleblowing in the United States and what academic research has shown regarding their effectiveness.
Författare

Theo Nyreröd is a PhD candidate at Brunel Law School.